Soundgarden: Live from the Artists Den 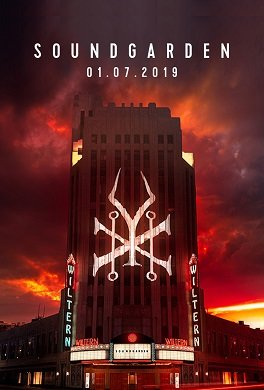 Soundgarden along with The Chris Cornell Estate today announced a partnership with IMAX Corporation (NYSE: IMAX) to bring Soundgarden: Live from the Artists Den — a never-before-seen theatrical experience capturing its famed February 2013 performance at The Wiltern in Los Angeles — exclusively to IMAX® theatres around the world for a special one-night event on July 1, 2019. IMAX digitally re-mastered the seminal, 21-song performance to be released in more than 30 markets around the world, from Argentina to India to the United States.

Soundgarden: Live from the Artists Den was taped on February 17, 2013 as the band concluded a sold-out U.S. Winter tour in support of King Animal, their first studio album in over sixteen years. The show has grown to legendary status among Soundgarden fans and was immortalized with a best-selling 2016 box set.

The nearly two-and-a-half-hour performance is a journey through the band’s storied career as one of the defining artists of the grunge movement. Soundgarden: Live from the Artists Den spans their early years with “Hunted Down,” through their monumental albums Badmotorfinger and Superunknown, respectively, with “Outshined” and “Black Hole Sun,” and to their final record, with nearly every song from King Animal, including “By Crooked Steps” and “Been Away Too Long.”

Live From The Artists Den features 21 songs never before released on a Soundgarden concert film, including 17 making their first appearance on a live album, and highlighted by “Blind Dogs,” which the band performed on stage for the first time ever at The Wiltern show. This concert production has become the all-time most requested Soundgarden show of their career.

“This is an unbelievably special show that we’re proud to bring to life as an IMAX global event for Soundgarden fans across the world to experience and enjoy,” said Megan Colligan, President of IMAX Entertainment.